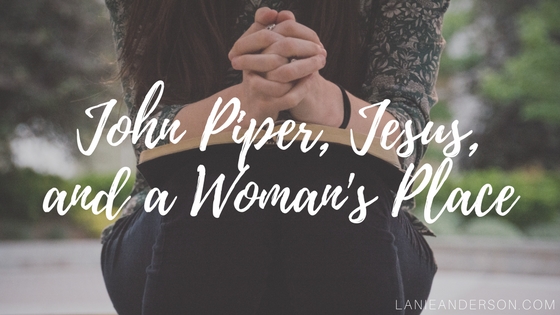 This blog post has been sitting on my desktop just short of completion for almost four months.

I typed the last sentence one evening in September and planned to edit and post it the following week. But I sensed God telling me to wait.

I know now why it’s been untouched for so long.

I checked Twitter last week, and my feed was filled with tweets about John Piper’s response to the question, “Is there a place for female professors at seminary?” on his podcast called “Ask Pastor John.”

Piper concludes in the episode that there is not a place for female professors at seminary.

I do not want to misrepresent Piper’s position. In fairness, he says, “Just to be clear, the issue is not whether women should attend seminaries in one of its program and get the best biblical grounding possible. The issue is whether women should be models, mentors, and teachers for those preparing for a role that is biblically designed for spiritual men.”

He makes his case on the assumption that seminaries exist to train men for pastoral roles.

Piper is a brother in Christ. He is someone I respect and have learned from as a young adult, but I disagree with Piper’s response.

As a friend reminded me this week, there is a posture in which we as brothers and sisters in Christ can lovingly disagree with one another in our local churches and over the Internet.

There have been many thoughtful responses of agreement and disagreement to Piper, so my aim in writing this blog is not to do what others have already done well. (The blog that best conveys my jumbled thoughts about it is a blog by Meredith Cook called “Should Women Be Seminary Professors?”)

But I sensed God nudging me to finish what I started in September and share it with my sisters, especially after a long week of what feels like people talking about us rather than to us over our proper places in both seminaries and churches.

In early summer last year, doubt reared its ugly head in my living room about my calling to seminary a couple of weeks after I resigned from my job in campus ministry. I had been an online student for two years but sensed that solely taking online classes was not for me.

Cardboard boxes from Home Depot slowly piled up around our home, and I questioned if this was the right move. I looked around the home we had purchased just over one year ago and imagined the one-bedroom apartment we would be moving into at the end of July.

“Did we hear God right? Were we supposed to leave everything that we knew to move to New Orleans, just so I could be a student on the seminary campus?”

I wish I could say the hesitancy had more to do with leaving the comfort and familiarity of our home in Mississippi. But the Enemy whispered a much deeper and disturbing question: “Do you really think you even belong on a seminary campus?”

It’s no secret that women are outnumbered on seminary campuses. According to The Association of Theological Schools, women made up 33 percent of students enrolled in seminaries in the United States in 2016, but that percentage is much lower at some seminaries.

I was sure of God’s calling to seminary, yet that old question in the garden of “Did God really say…?” kept resurfacing in my mind. I also had to prepare myself for the reality that some brothers in Christ might think the same about my calling.

While duck-taping packing paper around Fiesta dishware that day, I listened to a sermon on Luke 10:38-42 called “A Woman’s Place” from Blueprint Church in Atlanta, Georgia. God met me through that sermon with a timely word.

I wept (the ugly-cry kind of wept) as I listened to this pastor exegete this familiar passage about Mary and Martha.

If you’ve attended a church for an extended period of time, you’ve probably heard from this parable that Mary “got it right” because she chose presence with Jesus over business with Martha. She “sat at the Lord’s feet, listening to what he said,” while Martha was “distracted by all the preparations that had to be made” for dinner (Lk. 10:38-40).

But something else is at play in this passage. In the first century, Jewish students sat at their teachers’ feet. Jesus had not yet died and then conquered death, fulfilling prophecy and proving to be God, so many perceived Jesus as simply a “good teacher” or Jewish rabbi. His disciples often called him their teacher. Paul, a zealous Jew before he became a Christian, said he was “educated at the feet of Gamaliel,” his teacher (Acts 22:3).

Did you catch that? Mary’s posture is significant because this position of sitting at the feet of a Jewish teacher was reserved only for men, but Jesus gladly accepted Mary at his feet.

I am not trying to enter a debate about women’s roles in the church or seminary right now. Oftentimes, that’s quickly where this conversation goes.

My heart simply needed that message that afternoon in the middle of my bare-walled living room. I needed to know that Jesus wants me and other women at his feet, learning from him, pouring over Scripture with him, and hanging on every word. I needed to know that there’s no shame in a woman’s calling to seminary.

Women were disciples all throughout the New Testament. They were essential to the work and ministry of the church in the first century at a time when women were marginalized and devalued. I think this is important to understand because Jesus showed the disciples where a woman’s place was: learning at His feet just as men were learning at His feet.

Sister, you belong. Period. You belong because your Savior invited you to His feet to be just as much a learner as your brothers in Christ. You have just as much access to His teaching and just as much responsibility in His kingdom.

Jesus invited women to His feet 2,000 years ago, and He still does it today.

You – yes, you – are part of a seminary sisterhood whether you are in seminary or not because you are a student of Jesus.

As a disciple, you are enrolled for a lifetime.

No, Piper did not say that women should not attend seminaries, but he did presuppose that the role of seminaries is to train male pastors. Weeks like this can be discouraging for women who have a distinct calling to seminary or vocational ministry.

I had to remember this week that I am already invited to the table because Jesus has invited me to the table. I do not have to wait on anyone to make a way for the calling God has placed on my life, because He owns the inroads.

Sisters, this is much bigger than a calling to seminary. Some of us go to seminary, but a seminary degree doesn’t qualify any of us for our calling. All of us have a calling as learners with access to the teachings of Christ and responsibilities in the kingdom of Christ.

In the midst of conversations about a woman’s place, I want you to know today that I am praying for you and me. I am asking God to fill us with confidence that the invitation has already been extended to come to the feet of Jesus, not simply to sit but to learn and participate in His work in the world.